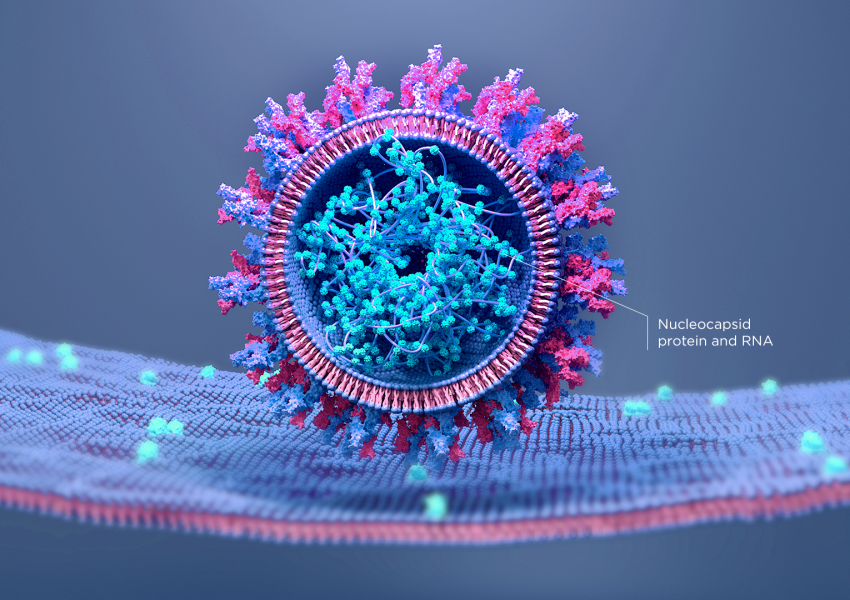 A new solution to prevent spread and to combat SARS-CoV-2 viruses has been developed by a team of scientists and engineers of the ASBIS Group under the supervision of Siarhei Kostevitch. The science behind this innovation is based on the concept of concerted action of ions of certain metals on the membrane of Ribonucleic Acid (RNA) viruses with no adverse effect on human cells. A device based on a unique two-stage ionisation has been created with purpose to prevent spread of the viruses in small enclosed spaces.

Our goal was to develop a solution and its practical realization to efficiently combat the enveloped RNA viruses in air, including the coronaviruses, especially the COVID-19. At the same time, the solution must not have a negative effect on human cells.

Research in the field of nanomedicine conducted from 1970s and onwardshas been conducted and concepts from theoretical physics and chemistry have been applied. A virus is a non-living, non-cellular infectious agent, or a “flash drive” that is activated only when it is attached to a living animal or human cell. The virus cannot replicate outside the cell. The best conditions for the transmission of viruses are characterized by cool, humid and foggy environment. Viruses, unlike bacteria, are very difficult to destroy, so we were looking for a non-trivial way to fight them.

Coronaviruses are spherical particles with a diameter of approximately 125 nm, with an envelope bilayer in which the membrane (M), envelope (E) and spike proteins are embedded . The coronavirus envelope consists predominantly of M. It is unique among E viruses. Based on studies, a hypothesis was that groups of ions of certain metals like K- and Pt0, due to the energy concentrated in them, would be attracted to the positively charged outer shell of the membrane leading to a galvanic isothermal reaction. As a result, the ions “burn through” the membrane of the virus, leading to its destruction. Ions of Magnesium are also well known for their capacity to strengthen living cells.

While studying the compositions of ions that can adversely affect the membrane of the coronavirus, a special attention was paid to the platinum group, since the elements 1of this group (platinum, gold) have a sufficiently high atomic weight and the optimal structure of the electronic shell. Ions with a higher atomic weight (mercury and the nextelements in the periodic table) could possibly be more effective, but they are known fortheir negative effect on organic cells.The selected composition of the ionic substance includes Na11, Mg12, Ag47, Cl17, H1, Pt78, Au79, I53, K19 among others. The ionic material has been produced by exothermic reactions of successive diffusion of substances in the presence of appropriate catalysts using an external energy source. The resulting ionic substance is stable, does not enter into a chemical reaction with water or air and does not evaporate under natural conditions. The ionic material does not solidify and remains liquid at temperatures between -55 and 135 °C. Complex ions released into the air contain, among the named elements, the OH- radicals. Such ions are supposed also to attract the positively charged outer shell of the viruse’s membrane, take the hydrogen or oxygen from it and let the membrane get destroyed by the isothermal reaction. The reaction, however, is not so simple. The life cycle of an ion is very short. However, the ions emitted into air are forced to constantly mutate in space; throughout the entire time, the mutations include various ion groups that create phase potential between the membrane of the virus and the ion that leads to the destruction of the virus. All components of the ionic material are selected to maintain the emitted ions in the environment for as long as possible, without harming any living cells.

The unique technology has been developed to place the substance with a composite ionised liquid into a porous structure, to cover it inside a shell of a large crystal lattice of a polymer, to make it sufficiently stable for long time and suitable for ions’ emission. As the result, when the material is placed into the capsule, the polymer reacts with air, forming a porous structure, which absorbs the ionized substance. The polymer itself is 100% dielectric and does not interfere with the operation of the liquid ionic substance. The ionized material allows to emit the ion groups into the air by applying high voltage, though of a very reasonable power. We use only 10W to apply 14-20kV for ions’ emission. The tests showed that such power is enough to create 30-34k of ions per cubic centimeter in the space of 50 cm from the device, or 15k ions in a radius of one meter from the device. It is well more than ions’ concentration in mountains, and is very similar to the level of the concentration of ions in a cubic centimeter at the bottom of a waterfall.

Unipolar or bipolar ionization methods can be applied to realise the second stage of ionization: to put ions into the air. We used a bipolar ionization method. For this purpose, the ionic gel is placed in two separate parts of a capsule, forming the cathode and anode of the ionic diffuser, with a few centimeters of an air gap between them. When the capsule is filled with the material, the polymer reacts with air, forming a porous material, which absorbs the ionic solution. The polymer itself is dielectric as well and does not interfere with the operation of the liquid ionic substance. Apllying 14kV to 20kV between the anode and cathode allows to create a stable electric arc adjacent to a glow charge formed between the tablets with the gel-formed material. Under the influence of an electric field, plasma is formed inside the ion gel and ions are emitted, moving into the fourth state of matter. The ionic plasma is not accumulated at the cathode nor at the anode but escapes from its source and diffuses into the external environment.

One of the key advantages of our solution is that it does not emit ozone. Level ofit is below the upper threshold of the safety regulations, as has been confirmed bynumerous tests. Unlike ozone generators, ultraviolet and quartz lamps, the devices based on our solution can be used continuously in presence of humans at homes, offices, production sites, cars, taxis and public transport (buses, minivans, trains, metro).

Results of tests to prove the concept

To conduct laboratory testing on a highly pathogenic RNA virus, in our case, SARS-CoV-2 we turned to the independent microbiological laboratory of level 3, which is appropriately certified and possesses the pertinent licensing, skills and knowledge for the performance of such tests. For correct testing, it is necessary to artificially grow the SARS-CoV-2 on special substrates, then infect flat epithelial cells, similar to those that line the bronchi, with this virus, since they are most often exposed to the COVID-19 virus. L929 cells been used for the tests. The Cytopathological Effects (CPE) method was applied, as the mass of dead cells is much lower than the mass of living cells, meaning that dead cells can be separated by centrifugation. Afterthat, the number of living cells remaining on the plate was counted. It must be notedthat in accordance with the laboratory regulations, the ionisation of plates infected with COVID-19 was only done once, at the beginning of the experiment, and only for 60 minutes.

After three days, more than 50% of the cells were infected withthe virus. On the plates treated with the ionizer, only 8% of the cells are infected with the virus on the 4th day. This confirms that the effectiveness of our method of combatting SARS-CoV-2 is at least 92%. We also conducted tests in order to identify the effect of ions on healthy livingcells. We treated the cells with the ioniser for 120 minutes, and tests show that the irreproduction has accelerated compare to the ones which not been processed with ionization. This shows that our ionization method creates a favorable environment forcell proliferation. The cells have become more active. So we have hence received confirmation that our method does not negatively affect the living and healthy cells.

The tests on vero cells proved as well that the ionization treatment does not affect cell viability. The Vero cells were cultured with a nutrient medium comprising of Dulbecco’s medium, 10% fetal bovine serum (FBS), 10% streptomycin/penicillin, 10%L-glutamine and l-alanine and subsequently incubated at 5% CO2 and 37 °C. On the day of the experiments, cells were detached from the culture vessel using Trypsin/EDTA (10 min at 37 °C) and collected in 5 Petri dishes (60x15mm) by centrifugation (6 min/1000 rpm/25 °C) at a final density of 200.000 cells ml-1. Four Petri dishes been influenced by the ionization (the fifth Petri dish was used as control). All Petri dishes were then incubated at 37 °C with 5% CO2 and daily observations wereperformed with the help of a biological inverted compound microscope (SP-95-I) to evaluate the proliferation rate of the cells based on the proliferation rate of the untreated cells (control). Observations on the proliferation rate of cells exposed to the ionization were noted over three days.

The two staged ionization method to emit to air different ion compositions hasbeen developed. The unique technology of creation of stable ionized substance in form of gel in porous structure allows to apply low power high voltage bipolar or single polar ionization to emit 30-40 thoused of ions per cubic cantimeter on the disence of 0.5 meters. The results of the tests carried out confirmed the deceleration in the spread of the viral infection, as well as a stimulation in the growth of healthy human cells. The tests with healthy epithelial L929 cell as well as tests on vero cells showed no negativeeffect of the ionization. The solution can be very useful to create a devices to deal with multiple RNA viral infections, including COVID-19 as prevention of the viral infection or ionic therapy of it.